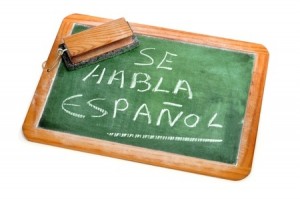 Although a high percentage of all human communication is nonverbal and sometimes too much emphasis is placed in the verbal content during the therapy session, having therapy in a non-native language carries certain challenges to the client as well as to the therapist.

In a study conducted  by Gretchen Foley MD and Julie Gentile, MD, they found “…an estimated 60 to 65 percent of interpersonal communication is conveyed via nonverbal behaviors… many nonverbal behaviors are unconscious and may represent a more accurate depiction of a patient’s attitude and emotional state… all nonverbal behavior must be interpreted within context…” for which I think it is important also the mastery of the verbal content. This dual focus, calls for a real understanding of the body language by the clinician but also an understanding of how culture, race, ethnicity express in different “tongues” and nuances.

Aside from the language, family connections are very important, and non-language based integration issues arise. Language in its verbal or non-verbal form is fundamental for psychotherapy, so people have to feel comfortable with the language as it touches emotions. Sometimes if your “hosting” country language is good enough, it can be therapeutic in itself to work through issues pertaining to the “hosting” country.

In the United States the number of Latinos and Latinas is growing exponentially and already in 2010, one in five Americans identified as Hispanic–with cultural ties to Spanish-speaking countries such as Mexico, Cuba and El Salvador. In some areas of the country, such as Texas, Hispanics may outnumber Caucasians by 2035, according to the U.S. Census Bureau. As this population grows, psychologists can expect to see increasing numbers of Latinos in their waiting rooms, classrooms and research labs. We need to close the gap for Latinos y Latinas.

Sadie Dingfelder wrote on the American Psychological Monitor magazine “…for many Hispanics who seek psychotherapy, their first contact with a mental health professional is also their last–50 percent never return to a psychologist after the first session. Caucasians drop out at a rate of about 30 percent, in comparison. Several factors play into this access disparity–including the cost of health care for a disproportionately low-income population … Dingfelder quoted Dr. Elizabeth Fraga, a Latino-focused practitioner and full-time lecturer at Columbia University’s Teachers College, who says”… many Latinos quit therapy simply because they do not feel understood” …some Hispanics are not completely comfortable speaking in English, and sometimes the values of psychotherapy–or the therapist–are antithetical to those of the Hispanic client.” For example, says Fraga, Latino cultures tend to value a family’s health more than that of its individual family members and may view a psychologist’s suggestions for self-care–such as taking a short vacation alone–as selfish….” Read the article

Unless all clinicians gain some familiarity with Latino culture and language or have an interest in becoming familiar with it, it is going to be difficult for Latinos to find people who may help them.

One of the goals of therapy is to create a trusting relationship and healing environment in which our clients can reveal themselves and engage in what is often challenging and hard work. When working with Latino clients, one must come to know and respect the unique expectations that are in part shaped by culture and world view, and integrate this understanding into the therapeutic approach and if we can manage their native language, we could really create a stronger therapeutic alliance and hit the jackpot. Haga una cita: se ha·bla es·pa·ñol